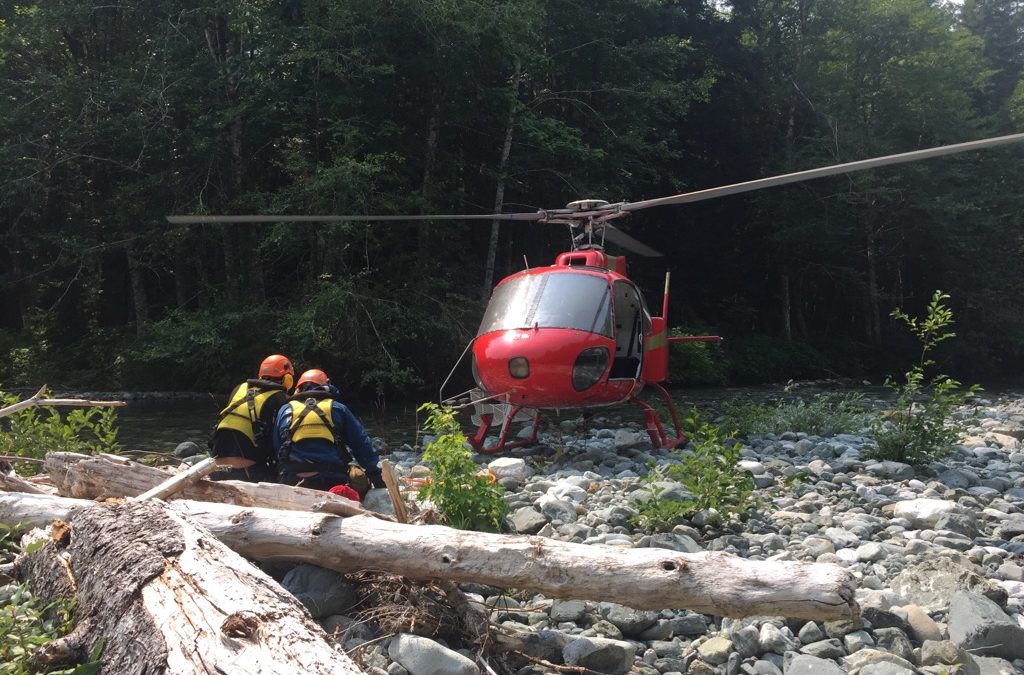 Campbell River Search & Rescue was activated on Monday Aug. 7th to perform a Class D long line rescue near Della Falls. At 12:15 we received a call from Alberni Valley Rescue squad to assist in the rescue of a member of a large hiking party who had become injured while hiking the trail into Della Falls. The male subject had received a minor injury to his back the previous day while using a cable car crossing which aggravated a previous injury. The man was unable to continue the trip to Della Falls and the hiking party he was with cared for him that night and then activated a SPOT beacon on Monday. Alberni Valley Rescue Squad attended by boat and two members hiked to the subject, but the condition the man was in and the distance he would have had to be carried out would have made for a complicated, extended stretcher pack, so they chose to activate our Class D long line helicopter team. We responded with 4 members and landed on a gravel bar near Margaret Creek, a short distance to where the subject was. We directed the Alberni Valley Rescuers on scene to place the man on a wooden foot bridge crossing on a creek. We inserted two rescue techs onto the bridge and lifted the man out where he was transferred to the helicopter and flown to the ARK resort at the opposite end of Great Central Lake approximately 35 km away where he was transferred to BC Emergency Health Services.

Over all it was an excellent example of how our Search & Rescue system in BC functions, a call is received, a SAR group responds and when the call evolves beyond the resources available on scene, specialized resources are brought in to accomplish the mission, in this case a long line rescue team.

This was our second long line rescue in 48 hours as we were also called to assist West Coast Inland SAR on Pogo Mountain near Clayoquot Plateau Provincial Park, when a hiker had become stranded on a bluff.
We are seeing more and more applications for this team. This was the 4th time since June we have activated our long line rescue team and they generally involve extraction from very remote, often high alpine environments.

Campbell River Search & Rescue encourages all backcountry user to carry some kind of emergency signalling device from a small mirror or flashlight to a satellite phone or emergency location beacon. Don’t be afraid to use them when you or people you’re with become injured or unable to complete the journey. Our window for rescue is already shrinking with the receding daylight hours and it’s essential we get the call early to activate the appropriate resource for the best outcome.